What to Make of Tanner Roark

There are bad seasons, and there are Tanner Roark's 2020.  The Jays, of course, signed Roark last offseason to a 2-year deal worth $24MM,  and it certainly appeared at the time that they were the only team to have offered that second year to make that happen.  It seemed like a not-entirely-unreasonable decision at the time, as he had been worth 2.0 fWAR or more in each of the previous 4 seasons, averaging 32 starts and 180+ innings each year over that span, and the Jays were pretty light on pitching.  Even if the results to that point were uninspiring (ERA/FIP/XFIP all in the low-to-mid 4's, save for a 2.89 ERA in 2016 that did not align with the peripherals), there wasn't any real reason to expect that he'd be anything other than the walking talking pitching cliche of the 90's: every fifth day, try and keep the ball on the ground, don't walk too many guys, go 6 innings and give the bullpen a bit of a rest.

That obviously went to shit this past year, to the tune of  a 6.80 ERA, a 6.86 FIP and a 5.84 xFIP over 11 starts and 47.2 innings pitched.  All the obvious caveats apply here, whether it's Covid-19 stopping and starting spring training, or pitching in some bandboxes, or the juiced ball, or small sample or whatever other things people are pointing to as reasons for anybody having poor seasons last year. I'd imagine the boost in lineup quality from the move from the NL to the AL didn't help either, as his trade from Cincinnati to Oakland in 2019 didn't exactly turn out too well.

I can't imagine I'm alone in kind of just wishing he were gone at various points this offseason, dreaming up scenarios where he or Randal Grichuk could be moved elsewhere as a way to offset salary coming back in a Kyle Hendricks/Kris Bryant or Castillo/whomever deal, but it's become increasingly clear that such a thing ain't happening as we've gotten deeper in to the offseason and in to spring training, especially now that Taijuan Walker has signed with the Mets and James Paxton has signed with the Mariners and Castillo, Hendricks, Marquez and whoever else remain not on the Blue Jays.  Nope, Tanner Roark is staying, and he's going to start, at least for now.

Given the short season last year, the league leader in innings pitched was Lance Lynn, at a whopping 84!  It seems kind of hard to imagine, then, that there's going to be any significant number of guys going out there and throwing 200+ innings this year, especially considering the way teams are beginning to use their bullpens for multi-inning relief and not letting starters see the top of the order three times.  Teams have 1458 innings (162*9, give or take extras, 7-inning double headers, home team leading after the top of the 9th, position players pitching, etc.) of pitching to cover in a given season, so guys who have the ability to take the ball every fifth day and throw 6 innings have a little more value in a 162 game season than they would in a 60-gamer, and doubly so when everyone is working on a reduced workload.

As Andrew Stoeten mentioned in his last mailbag, there are a solid dozen or more guys in the organization right now that we can expect to see start games (or provide bulk after an opener) behind the obvious Hyun-Jin Ryu.  Ryu himself isn't a model of health, never having thrown 200 innings in a year, and having missed all of 2015 and most of 2016.  Groin, arm, and neck issues have troubled him in the past, even if he's stayed injury-free and wildly effective these past couple years.  Still, I think we can only earmark him for somewhere around 150 innings max this year after throwing 67 in 2020, which leaves 1300 innings to spread out across the rest of the pitching staff.  Nate Pearson's workload will need to be managed too, given his youth and last year's injury.  Aside from Ryu and Pearson, there's really not all that much high-upside to be had.  It seems, rather, than this Jays rotation is going to be built more on depth than on octane, and the more I think about it, that may not be such a bad thing?  Or at least I'm trying to put a positive shine on this.  A few bullet points, in no particular order, in regards to the general state of pitching for 2021:

Taking all this in to consideration,  Roark was really, really bad last year, ranking in the bottom 5% league-wide in a bunch of statcast metrics, so it's not like he's going to get a ton of rope here or anything.  The Jays aren't going to let him carry an ERA in the mid-6's to the end of the season again, but it's probably going to take a lot more to cross the you-suck-so-bad-we-have-to-release-you threshold than we'd like to believe unless another couple of options present themselves from the Kay/Waguespack/Murphy/Hatch group, or a return to form from Ray or Stripling.  Even then, the Jays are going to give him a couple months and see if he can provide some below-average (or better?) performance and eat some innings to keep the rest of the staff as fresh as possible.
After a quick dig through his Fangraphs page, I've noticed a couple of things, whether they matter or not.  Beyond the obvious velocity dip, his pitch mix has changed in recent years, and the HR rate has gone up as GB% has gone down.  Seems like when he threw more sinkers, he gave up fewer HR's, though I submit that this may be a result of the velocity dip since 2-seamers/sinkers tend to be a couple MPH slower than 4-seamers, and velocity is obviously king these days. The homer spike really began after the trade to Oakland in 2019, too, not necessarily just overnight after signing in Toronto, and that aligns with the whole launch angle revolution. 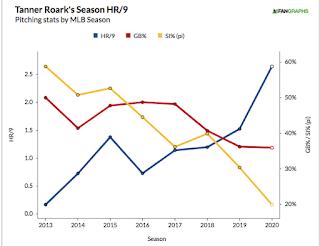 I dunno, I wish I could say that I thought he was due to regress back to what he was before, but he wasn't even all that good before. I'd say there's a good chance he doesn't survive the season without keeping the ball on the ground, and even then, his ability to keep the ball on the ground made him sort of an also-ran whose usefulness came in the form of being an above-replacement talent-level pitcher who could just throw a lot of innings.  We're going to be in a situation this year where we're just completely dumbstruck at how guys keep getting sent out there to pitch.  The ability to provide length this year may just be as important as being able to get guys out. Fortunately the lineup the Jays are going to send out there every day ought to make that a bit easier to swallow.
Posted by Grady at 10:41 No comments: