So I think we're going to do this again.  At least for a while.  I realize that the last like 12 posts begin the same way, but whatever.  Updating this page regularly in the past was something that was made possible by the fact that I hadn't been working an actual job way back when, but rather was playing internet poker and living rent-free in my folks' basement.  In the several years since this page was updated regularly, I've left the poker world, got a real job, got married, had a kid, bought a house and more, not leaving a ton of time for baseball and writing.  Of course, now that there's a plague destroying the world, I'm working from home, if at all.  The Blue Jays are exciting again, and they're trying to add a bunch of stuff this offseason, and I pretty much just refresh Twitter and MLBTR with any spare time I've got.

So then, I suppose we can let 'er rip again, yeah?

We all know that the Jays are looking to add in multiple spots this offseason, and that they've been linked to pretty well every available player under the sun.  I'm not sure how much the Jays front office is willing to add this year from a payroll perspective, but we're only a couple years removed from payrolls in the $160MM+ range, and Cots is forecasting something like $76MM as of right now when considering arbitration salaries for Teoscar Hernandez and Ross Stripling and Robbie Ray having re-signed.  Adding $50MM in one offseason seems like a lot for most teams and most years, but $125MM seems like a downright reasonable payroll for a team with Rogers as an owner and leaves plenty of flexibility for future seasons.  Is adding $60MM farfetched?  $70MM?  In the midst of a pandemic?  Not sure!  I think they're more likely to take on extra money for a longterm and/or high-impact piece rather than a rental, but we'll see.

Anyway, I've got my preferred course of action for the offseason and the odd plan-B to go along with it, but with the offseason being so fluid and the Jays having a bunch of positional and financial flexibility, we're probably in a situation where the Jays have 20 different roadmaps, depending on who they're able to sign and who they can trade/trade for.  Lots of speculation here on my part, but my preferred course of action for the offseason hinges on Centre Field, as I think the Jays' best offseason move is to sign George Springer (MLBTR predicted 5 years, $125MM).

I think Springer makes the biggest impact for this team (on the position player side, at least), and the contingency plans are fair at best.  He's projected for 4+ WAR via both ZiPS and Steamer, far ahead of Jackie Bradley Jr.  But what's next if they're able to land Springer?  Signing Springer creates a bit of a logjam in the corner OF spots, with Gurriel, Hernandez and Grichuk fighting for two spots.  We've heard plenty of chatter about Gurriel being a trade chip, but I think the ideal play under this scenario is to move Grichuk instead.  The obvious problem there is that he's owed $31MM over the next three years, and there's just not a lot of value there.  It's not that the contract is so bad from a $/WAR perspective; he's projected to be worth somewhere in the 1.5 WAR area if you're inclined to believe ZiPS or Steamer, and probably only needs to provide something shy of 4 WAR over the balance of the contract to see that $31MM in value.  The problem is that we're in a world where Adam Eaton just signed with the White Sox for 1 year and $7MM with a club option and projects to similar value, (even if they arrive there in different ways-- Eaton provides more OBP and less power), without the extra commitment, so it's fairly unlikely that you're going to convince someone to give up useful assets to take his contract.

More likely is that, if traded, Grichuk is used to offset another contract coming back.  We can dream on Yu Darvish (3 years, $61MM left), if the Cubs are even willing to move him, and I think that one actually works if the Jays add some prospects.  Not sure if Kris Bryant is available either, but Baseball Trade Values seems to think that Darvish and Bryant, with all their salary, could be had for some nice prospects and Grichuk to offset the salaries a little: 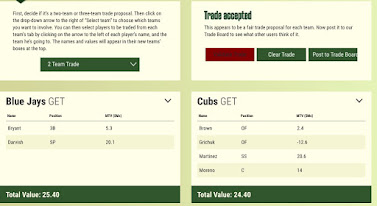 No idea if the Cubs would ever do this, but it certainly works for the Jays.  Adding Darvish ($22MM/$19MM/$18MM) and Bryant (~$20MM) and subtracting Grichuk ($10.33MM in '21-'23) nets an addition of about $33MM to the current payroll and addresses the hole in the infield and adds a pitcher.  If the theoretical Springer deal is backloaded slightly, it adds flexibility for bullpen additions until Bryant is off the books and leaves room for Groshans or Martin if either is ready and needs a spot for 2022.  This trade isn't really contingent on a Springer signing other than having an extra outfielder, I suppose.
The more likely scenario is that nobody is interested in Grichuk and that it's Gurriel that gets moved.  He projects as a ~league-average player with upside with a cheap contract, which makes him someone that another team might actually want.  Signing Springer and adding pitching for Gurriel certainly doesn't hurt, whether it's Blake Snell, Sonny Gray, or some other pitcher that we've not heard about in trade rumors yet.
Jackie Bradley definitely works as a backup plan; he's a left-handed batter that would be joining a primarily right-handed lineup, and he defends very well.  MLBTR predicted that he'd sign a 2 year deal at $8MM a year, which is a commitment that leaves a lot more room to add elsewhere on the roster than what Springer would cost.  It's a bottom of the order bat, but he's had success in spurts previously and had a good 2020 (119 wRC+ over 217 PA's).
My biggest concern is with the entire offseason is what to do in CF if you miss out on both.  The Mets are a strong fit for Springer, and it was reported today that there are multiple teams interested in JBJ's services as well.  The Jays have a backup plan at C if Realmuto signs elsewhere-- the internal options of Jansen, Kirk and McGuire, assuming he survives the offseason without being moved/DFA, is perfectly fungible.  If they miss on, say, LeMahieu, they can pivot to Lindor, or to Justin Turner, or to Bryant, or to Correa, Semien, etc, by virtue of having Biggio and Bichette (and Vlad?) able to play multiple infield spots.  If they want to sign another SP and miss Bauer, they've got options with Paxton, Walker, Tanaka, or Odorizzi, or move to the trade market.
CF isn't exactly flush with options though.  The drop-off between Springer and JBJ is fairly wide, and the options behind JBJ (Pillar? Almora?) kinda make you want to stick with Grichuk as a plan C.  I think the flexibility at all the other spots is part of the reason that the Jays have been so patient to this point; gotta add an infielder, not specifically a 3B or 2B or SS.  CF is just so fucking dodgy on this roster though, and there are so few quality options out there, relative to the options at other positions.
And it's really that flexibility that this whole Blue Jay offseason is built upon, isn't it?  As a team with plenty of budget space available, I think a Springer signing moves the needle and maintains that flexibility moving onward through the offseason and improving the team as much as possible.