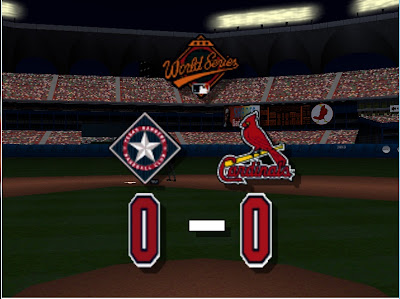 That would be a screenshot from Major League Baseball with Ken Griffey Jr. for the N64; a screenshot that I purposely took just for this very day.  It will lead me in to a nice boredom piece for once the offseason really gets going and there's nothing to write about.

Anyway, I don't think that it's a big surprise to anybody that the Rangers got to the World Series, and conversely, it's a giant surprise that St Louis made it.  Not only that, but I think we can pretty much kill the notion that old men like to present when they say "The way to win a World Series is through starting pitching and defense" since neither of these teams have pitched overly well, save for Chris Carpenter in game 5 of the Philadelphia series.  And you know, offense is an equally important part.

I don't think it's going to be a shock that I predict the Rangers to win the series with relative ease.  They're just simply a better team, though it's not like the Rangers haven't lost a World Series to a worse team before or anything.

St Louis has gotten here despite some pretty terrible starting pitching.  Texas certainly gets the nod with regards to pitching, despite not having a real ace the way STL does.  Don't get me wrong, CJ Wilson is awesome, but in the playoffs so far, he's really been the suck with an ERA over 4.  I'm wondering if there just aren't any innings left in that arm until next season, given the fact that he was a closer in 2009, going from a career high of 73 IP, to having thrown 427.1IP over the last 2 years, but maybe that's nothing.  Still, I feel like Holland/Lewis/Harrison is as good, if not better than Lohse/Jackson/Garcia.

The offenses are pretty close, I guess, but I give the edge to Texas with a really balanced attack 1-9.  STL's offense is pretty good, with Albert/Berkman/Holliday, but it just kind of stops there.  David Freese has kind of lit a fire under himself so far in the playoffs, but that can't really last forever, can it?  The best hitter in the playoffs has been Nelson Cruz, and the rest of the Rangers offense has been pretty solid the entire way through.

I seriously don't effing know how the Cards got this far, beating two teams who are so clearly better than they are.  They've played some good baseball over the last month or so, and I suppose they pounced on Milwaukee's dogshit defense.  When we get right down to it, Texas and Philadelphia are/were probably the two best teams in 2011-- I just don't see St Louis getting through both of them in one postseason.  It was wild enough for STL to get to the playoffs, let alone to the World Series, but that's going to be the end of 'er I feel.
Posted by Grady at 12:38