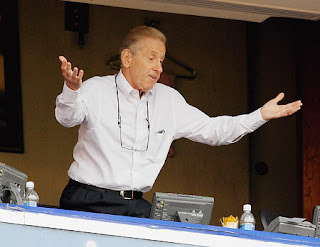 It just keeps getting worse.


It was always going to be bad, but if Ike Davis actually has Valley Fever, as is being reported, then sweet Jesus.  This lineup is going to be David Wright (if he stays healthy), sort of Daniel Murphy, and that's about it. Instead of re-signing Jose Reyes, they used the money that they saved on that contract and spent it on a bunch of aging relievers who aren't worth free agent compensation anymore.  They'll get two draft picks out of Reyes, thanks to his deal with the Marlins, but if they had opted to trade him early in the season (before his injury), they could have found much more value, and would have found themselves relatively equally far from the playoffs (see: really far).

I can understand the non-trade of David Wright, thanks to the goofy little clause in his contract that allows him to void the club option on his contract, but I think the management in this organization has really dropped the ball, and the ownership fiasco obviously hasn't helped anything along.  They need to either shed the contracts of, or get rebound seasons from guys like Jason Bay and Johan Santana.

They've cut about $40MM worth of payroll since last opening day, and I don't think any team has ever had success in the season immediately following such a salary drop.

I feel like the direction that the club is moving (eventually) is correct, but its' just going to take quite a bit of time.  This farm system isn't anything special, but it should be a lot better, since they should have traded some guys for a wealth of prospects by now.  I can see Jon Niese getting moved somewhere at some point this year, especially if he ever begins to match his peripheral stats and stays healthy.  He's pretty much Gio Gonzalez, so if he does get traded, we can expect to see a similar pile of prospects.

Until then, they do have some prospects to go along with their young position players, so it's not a complete disaster forever.


They could probably finish with the worst record in the NL, thanks to their division.  They'd have to be pretty unlucky, or just trade a whole bunch of their players, but it is at least possible.  They've still got some good young players, and who knows, maybe Jason Bay and Johan Santana aren't completely finished.