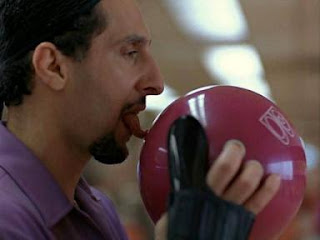 This is a Big Lebowski reference, for anyone who doesn't happen to be on quite the same page as I.  Don't fucking tell me that you haven't seen that movie.  And spell-check is telling me that "movie" isn't a word.  What the fuck is going on here?

Anyway, the White Sox are looking for vengeance for the beating that their pitching staff took last night, and they'll do so by sending some Quintana guy to the mound.  He should be a pushover. I don't think his name is Jesus, for the record, but maybe it is?  I doubt it, but I don't think it matters either way, and we do advance to the next round robin.  Am I wrong?  Am I wrong?

Uhh, what else?  Paul Konerko is nowhere to be seen.  He probably kidnapped himself.  That fuckin' bitch.  I did not watch my buddies die face down in the muck so that whore... deep breath.  But really, Paul Konerko was a late scratch last night, and isn't in the lineup for the ringers (i.e. dirty undies, the weight, the "whites"... the ringer can not be empty).

Speaking of ringers... we've got Brandon Morrow tossing tonight.  And with no Konerko in the lineup for the White Sox, I feel confident.  Ricky Romero looked alright to me, save for a fat one given to AJ Pierzynski and some spotty defence behind him.  I think the most important part of the day was his lack of walks, though he looked like he was pretty done for out there in the 8th, even after throwing like 90 pitches or something similar.

I feel like I'm forgetting something.  Something... about last night's game.  Something central to the Blue Jays.  Oh right, Alex Rios had two hits last night, and he used to be a Bluejay.

And Colby Rasmus went 5-for-5 with a 2, 3 singles, and a smooth homerun.  And a Zaunhead.  Lineup experiment worked out alright, huh?

Stuff
"Baseball Abbreviations" is a category on Jeopardy tonight.

The priceless (the good kind) John Lott has a bunch of stuff on his twitter today, mostly about the draft and draft picks, and I assume that he talks about the same stuff mentioned below in this article for the National Post, though I haven't read it yet.  Among the items:


Mike Cormack of SN tells us that Tinnish also said today that the Jays have a good shot at signing all of their 1st-through-10th rounders.

Baseball America has a list of college seniors who have already signed on the cheap, and the Jays have saved at least 300k on Tyler Donahue, who got a "4-digit" bonus for going in the 4th round.