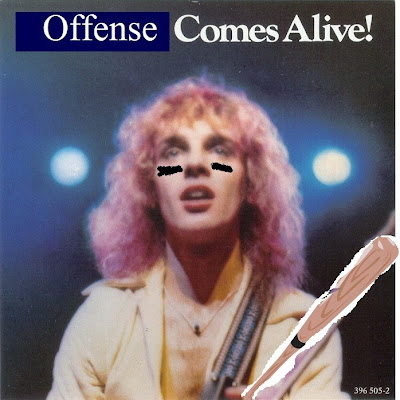 Is this an original idea?  Google didn't really tell me much when I typed that in, but I can't possibly believe that I'm the first person to come up with such an idea.  Either way, four partially-related thoughts:

Anyway, yeah that was nice.  You can always rely on a good batch of offense when Jeff Niemann comes to town.  That Bautista homer was a fucking blast, and he just looked like he had a nice little game for himself anyway, no matter what the stat sheets say.  The timing and approach looked a little better, plus he had a cute little play to throw out Carlos Pena at 2B in the first inning.  As referenced yesterday, Adam Lind continues to demolish Jeff Niemann.  Lind actually had three hits and a walk last night, and is probably going to need to get himself a Zaunhead.

I'd like to point out that, despite going a combined 1-for-7 (plus a walk), both JP Arencibia and Colby Rasmus got some good swings in and hit the ball pretty hard.  JPA even complained on twitter about hitting the ball hard three times and having nothing to show for it, and I'm pretty sure I pointed out the other day that Rasmus has an xbabip (expected babip, based on line drive%, groundball% and flyball%) of like .400, but a babip of like .200.  So yeah, it's early, and we should be able to look past the batting averages of .200 and .063, since the balls are going to start falling in if they keep hitting them hard.  That, plus defense.  I might make a whole post out of this soon, but I'm not going to shit my pants about it after 9 games or whatever when even a full season isn't a big enough sample for stuff like babip.

Ricky didn't appear incredibly sharp last night, but this post at DRaysBay will explain that, at least partially.  I'm not sure if this works perfectly, since Romero is one of those reverse-splits pitchers, but the point is still the same: Romero's changeup is neutralized against lefties, though he's counteracted that with increased curveball use so far this season (at least he did against the Red Sox).  It's a good read, and is just another example of how far ahead of the game the Rays are.

Umm, Mr. Farrell, can we speak candidly, for a moment?  Top of the 8th inning:

What the fuck is this shit? Oh right, Cordero is the "8th inning guy".  Seriously, get your lefties in to the ball game against the good lefty batters.  Perez vs. Pena, Cordero/Janssen vs. Longoria, Oliver vs. Scott, Zobrist and Joyce.  This is fucking easy and makes me furious when major league managers, getting paid multiple million a year, get this so terribly wrong.  The worst thing is, if it were the 7th inning, this almost certainly would have been handled correctly.