Do you guys remember that time that Tiger Woods won the US Open at Pebble Beach like 10 years ago?  He was the only person under par for the whole tournament, and won by like 15 shots or something retarded?  The next issue of Sports Illustrated featured Tiger on the front, making a U Mad face, with the headline "Any Questions?"

Update- Thanks to hard Lemonade for the google-work 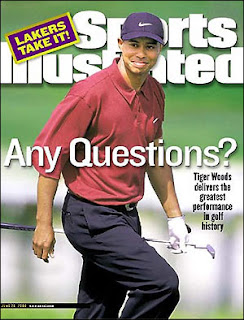 I say this, because that game yesterday was one of the worst curbstompings of a ballgame that I've seen the Jays issue in a long long time, and with Jose Bautista, the only real offensive threat on this team, going 1-for-4.  John Danks was straight up bad, and Ricky Romero was pretty good once he settled in after a shaky first inning.

And then of course, there was the little spat between Bautista and Danks after a Bautista popup that, by all rights, came on a pitch that should have been hammered.  Bautista slammed his bat down.


"I was upset at missing a pitch, if he took it the wrong way, I'm sorry. I'm not here to make him feel good. It really doesn't matter to me what he thought. What I'm not going to allow is when I'm running by him, him yelling at me again, so I yelled back at him."

So by taking 3 of 4 from Chicago, the Jays move over .500 again, but will have their hands full (?) with the Cleveland Indians, who are the owners of the best record in baseball.  I really don't see this lasting for Cleveland (hence the question mark above), and I think this record is just a function of playing better than expected, a decently easy schedule so far (hello AL East), and the plain old small sample size argument.  This team, with this pitching staff, can't possibly be a true-talent 85 win team.  Prove me wrong guys...

Then again, Cleveland gets to face Jojo Reyes tonight, so maybe they really are running hot.  Fausto Carmona goes for Cleveland.  Carmona has a worse ERA than Jojo, despite pitching in the AL Central, by the way.


Probably more later, but there just aren't that many interesting things available at this point on a monday.
Posted by Grady at 10:15