That's it, let's trash the place 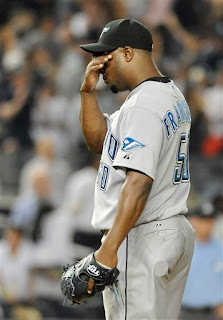 Right?  I dunno. It's not like that was a game that the Jays deserved to win or anything.  I mean, yeah, it was a blown save and a bullpen meltdown, but let's be honest about this game.  There was a 1-inning spurt of offense that was based around singles that just kind of randomly found holes, and that's about it.  CC Sabathia no-hit the Jays for the second half of the game.

Personally, I'd have left Romero in the game for the 8th, and remember thinking the same last night (so don't call me a hypocrite after yesterday's post).  My rationale was that, while effective, the Jays' bullpen has been very overworked, especially given the way Farrell used the bullpen after Villanueva came out on Monday.  That, and Romero is pitching about as well as anybody in the world right now.

Anyway, I'm still behind Frank Frank, no matter how average he's been, but I think the leash is getting a little shorter.  I'm ready to give him a bit of a pass since he's coming back from a pretty serious injury, though if that's the case, maybe he shouldn't see quite as many high-leverage situations as he does.  Given the fact that he threw 20 pitches in Monday's game, I'm not sure he should have been in there last night to begin with.  Frasor threw 23 in his inning on Monday, Rauch threw 29.  Which brings me to my next point.

Free Shawn Camp.  Where's that guy been anyway?  He's been arguably the Jays' best reliever over the last year and a half, and has taken care of high-leverage spots just fine for the most part.  You'd think that when your bullpen throws 7 innings (plus a spot start) in 2 games, your best reliever would probably be in there somewhere, but I guess not.  And it's not like Janssen HAD to come out of the game when he did.  He looked just fine, and is equally effective against LHB than Rzep is.  Just seems like kind of a fancy-pants strategy to be yanking guys left and right.

Early game today.  Jojo Reyes pitches today, which obviously means that Jose Molina is batting 5th.  Wait a second. What?  Nope, I'm serious.  Thrilled.  Freddy Garcia goes for the Yankees.  Jose Bautista is a career 4 for 6 against Freddy, with 2 HR's and 3 walks.  It's a good job that Jose Molina is protecting the guy who's protecting Bautista.

Adam Lind was eligible to come off the 15-day DL today, but didn't.  He's still a few days away, but will begin a rehab assignment either today or tomorrow.

Retroactive Zaun-heads:  Ricky Romero for yesterday, Carlos Villanueva for Monday (5IP, 2 hits in a spot start), Yunel Escobar for Sunday (2 for 3 with 2 walks), and Jose Bautista for Saturday (2 HR's), and Aaron Hill (3 for 4, isn't Jojo Reyes).  That's a lot of forgets in a row.