The Best Player in Baseball 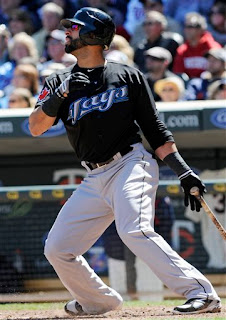 There he is folks.  And he's wearing the right color on his jersey too.  That's always really convenient.  It would be pretty neat if people were on base in front of him, but hey.

Oh, and if somehow you've been vacationing off the planet until this morning, Jose Bautista hit 3 more homeruns yesterday, bringing his total up to 16 for the season.  There's something to be said about that: the year that Barry Bonds hit a record 73 HR's in a season, he had 15 at this exact point in the season.  Want more?  Joe Mauer and Justin Morneau have a combined 5 career homeruns at Target field over the last season and a quarter since it's been opened.  Jose Bautista had 5 THIS SERIES, and has 7 in 5 games.  Similar to The Rogers Centre Skydome, Target Field has a nice dark backdrop behind the CF fence (in other words, it's easy for hitters to pick up the ball out of the pitcher's hand), you just have to hit the ball far to get it out of the park since it's so big.  Fortunately, Bautista does, in fact, hit the ball far.

Care for some post-game quotes? Done.


"He doesn’t swing at their pitch ever.  You’re witnessing the best Blue Jay ever.”

Maybe a bit of a stretch (Alomar, Fernandez, Delgado, HALLADAY?!?!?!?), but shit, he's certainly doing okay.  I think I'd need a bit more of this performance to grant him GOAT status.


“The second home run, it’s an 0-2 pitch.  It’s a ball in, not on the plate and yet he’s able to get the barrel on the ball and drive it out of the ball park.  The one thing he’s doing, he not only has an awareness of the strike zone, he’s seeing the ball exceptionally well, he’s disciplined and he’s obviously playing with a heck of a lot of confidence right now.”


"He’s turned himself into the best hitter in the game, as far as I’m concerned. It’s pretty amazing. Every single ball he hits, whether it’s a foul ball or whatever, is right on the barrel. To me it looks like he’s used one bat the whole season. It’s unbelievable. Words can’t describe what he looks like at the plate right now.”


“Every time we made a mistake, he put it in the seats."

So I got that goin' for me.  More on him later.

Brandon Morrow, again, threw a fuckton of pitches over 5 innings.  He was sharp early, as usual, but threw 50+ pitches over his last two innings.  Still, 8 strikeouts over 5 is good.  I feel like he's pretty close to where he wants to be, but isn't quite right yet.  Those really fun Brandon Morrow outings where he just makes guys look like complete buffoons are on the way folks.

After the game, the Jays activated Jayson Nix, and optioned David Cooper back down to AAA Las Vegas, and I am completely indifferent.  Adam Lind is due back today, which will send either Corey Patterson, Juan Rivera, or Edwin Encarnacion to the bench (probably in some sort of systematic rotational thing).

To be perfectly honest, I'd rather see John McDonald play every day at 3rd considering how bad EE and Rivera have proven themselves to be, and how bad Corey Patterson actually is/will be when he regresses to his actual talent level.  My expectation is for Patterson to continue playing everyday, given the way he's played recently.  I mean, it's not like Edwin (-.6 WAR) and Rivera (.1 WAR) are doing anything to prove that they belong.  Patterson and McDonald are actually contributing in some way, Patterson with the bat, and Johnny Mac with the glove (though fallible humanoids would probably point to Johnny Mac's 2 HR's and say "hey man, Mac's hitting the ball well."  News for you: no he isn't).

The only team hotter than the Blue Jays right now is the Detroit Tigers, who the Jays happen to play next.  If you choose to remember last week, before the current 5 game winning streak, you'll remember that the Tigers pretty much decimated the Jays over a 4 game set in Toronto.  This one's a 2-gamer in Detroit.

Links: The Jose Bautista Version
When Jose Bautista signed his contract extension this summer, a lot of people were really concerned that the Jays just signed the Vernon Wells contract, version 2.0, just a few days after having moved version 1.
The Wells contract is a whole new can of worms that I'm not interested in getting in to, but Bautista's contract is not anywhere near that bad, even if Jose were to regress big time.

Basically, Jose Bautista, and his $8MM salary for this season, needs to be worth just shy of 2 WAR this season for the Jays to break even on their deal.  Given that Bautista, so far, through 40 games (he's played 32) has been worth an astonishing 3.9WAR, I think the Jays are probably going to get their money's worth this season.  There's more to contract value than that, but that's the gist of it.

Dave Cameron from Fangraphs wrote a piece about Bautista's value to the team from a monetary view. And it's good if you're a Jays fan. Here's a quick taste:


"I doubt any GM has ever had a better off-season than than the one the Blue Jays young GM just had."

MLBTR looks at the extension in the same fashion Dave does.

Dustin Parkes over at Getting Blanked compares Bautista to other players, and other teams, and tries to justify his earlier comments about this contract being bad.  Basically, he's telling us not to get ahead of ourselves and assume that Bautista is going to be this good for the duration of the contract, and that there wasn't really any reason to go out and spend this much at this point, especially when these extra wins that Bautista is putting up mean less to a team that, in all likelihood, isn't going to use them to get to the playoffs in the AL East with the Red Sox, Yankees, and Rays all offering much better competition.  Look at the "Marginal Wins" section from my "Stats" page for more about what (I think) he's referring to.

Zack Sanders compares Bautista's 2011 so far with the start of the greatest offensive season ever, Barry Bonds' 2001.

Update: Holy shit, does Dave Cameron have a hard-on for Bautista or what?  At least this is modestly entertaining: Chuck Norris-style Jose Bautista Facts... Oh wait a second, these are all true.

SBNation's Jeff Sullivan looks at the "True landing spots" of JB's homeruns since the start of last season.  Careful... there's a few graphs.  This is something Sullivan wrote about a month ago that shows us that Jose is getting a lot fewer pitches in the strike zone.

From a Pirates blog, talking about the decision and fan reactions from the fateful trade that sent Robinzon Diaz to Toronto in exchange for some scrub.

The Toronto Star's Richard Griffin gives us a poorly kept secret about Bautista.

Beyond the Boxscore has a really funny looking, mildly confusing graph.
Posted by Grady at 14:20