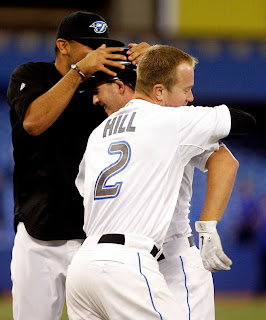 Well that was some fun now, wasn't it?  Maybe this Cooper kid isn't so bad after all.  A walk-off.  Against the Red Sox!

Holy crap a lot happened in this game (most of which I missed while watching Thor, which is was quite good, by the way), so let's recap this one with several short sentences:

Jon Lester stunk, but remained really classy the whole time.  Kyle Drabek still can't really find the strike zone with any real consistency.  Adrian Gonzalez is a good hitter.  Jose Bautista is better.  JP Arencibia continues to show that he should be playing everyday.  Yunel Escobar got hit with a ball and is probably out for the next game or two.  David Cooper served as a respectable replacement, earning a Zaun-head.  Rajai Davis is fast.

So with Yunel out day-to-day, and Adam Lind still out with no real certainty of a return time, but nobody going on the DL, and there being 8 people in the bullpen, it would appear that TOR will be going with a 1-man bench.  Breathe.  At least Jesse Litsch is pitsching tonight, so JP Arencibia should get the nod behind the plate, instead of being the oddly-chosen odd-man out.


Fangraphs wonders which MLB pitcher has the best "stuff".  Dave from Fangraphs does a live chat once a week, and someone asked if Brandon Morrow has the best "stuff" in the majors, which prompted him to just write an article about it.  I figured A-Rod probably has the best stuff since he has the most money, but I guess I misinterpreted the question.

When Milton Bradley got cut the other day from the Mariners (you know you're bad when...), The Mariners were technically cutting the cost of Carlos Silva, for whom they acquired Bradley last year.  This article in the Seattle Times examines the other expensive cuts over the last few years (Hint: there's a Blue Jay on this list!)  As an aside, Bradley was once traded for Andre Ethier, this blog's most mentioned non-Jay.

Jays beat writer Gregor Chisolm (@GregorMLB on twitter) writes that Travis Snider isn't ready to return to the bigs, and if Adam Lind goes to the DL, Snider won't be brought up (I'd expect that to be Mike Mccoy, especially with Yunel Escobar out a couple days after taking a ball to the shin-ankle thing).  Snider is hitting .425 in AAA through his first 10 games, and has a .511 OBP, but apparently isn't hitting for power, which is what we really want out of him.  Lind says that he's "feeling much better", but isn't sure when he will resume baseball activities.

And finally, in a piece that is about as minor as it gets, The Oakland A's optioned Jerry Blevins to AAA, and have called up Trystan Magnusson.  If that name sounds familiar, it's because he was traded from Toronto, along with Danny Farquarson (who turned in to David Purcey) for Rajai Davis this summer.

Shaun Marcum kind of disappointed too, but I'm not sarcastic this time.  Clayton Richard only lasted 3.1 innings, allowing 8 runs (7 earned).  Marcum struck out 8 over 6 innings, but allowed 9 hits and 5 runs.  I dunno, it's the Padres man, you should be better than that.

Tim Lincecum and Ian Kennedy went out and saved the day though, both dummying the opposing lineups.  Kennedy went 8 shutout innings, allowing 4 hits and walking 3, with 8 K's.  Timmy, not to be outdone, went 8 shutout innings, also allowing 4 hits, but only walking 2 and striking out 9. (note: dayum)  Brian Wilson came in to pitch the 9th, allowing a walk and a hit, but no runs.  The giants answered in their half of the 9th by walking off on a Cody Ross double, capping off a great night of baseball.

Jesse Litsch pitsches tonight for Toronto, going up against John Lackey.  This one starts at 7 ET at the Rogers Centre Skydome.  This one's on Sportsnet 1, which I get at home.  And remember that day two weeks ago when I found out that I get that channel at home?  I also get AMC at home.  This just keeps getting better and better.
Posted by Grady at 12:06