Well that was a beating.  It would appear that when you only throw 57MPH, you should probably keep that ball down, or at least on the corners of the plate.  Mills' first two innings were actually OK, but he lost it in the third, allowing 6 runs.  Mills threw 44 pitches in the 3rd inning alone, and they were all over the place.  The pitches that didn't get taken for hits or called balls were absolutely smashed foul, or lined off the fence.  I actually count 13 pitches there that are right down the middle of the plate, which doesn't work unless you can throw in the 100's. 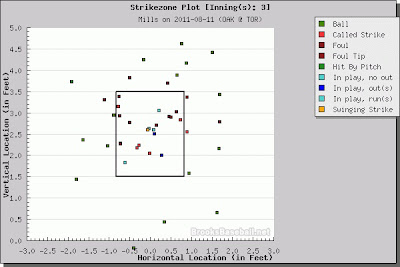 Let's just hope this is a blip.  It doesn't make any sense that he can have so much success at the AAA level in a hitters league, and then suck against major league hitters.

The Jays fought back a bit with a rally in their half of the 4th inning, at least until Aaron Hill got his hands on the rally.  That pretty much got shit on though, after Oakland scored 4 more in the 6th thanks to some errors.  JP Arencibia did what JP Arencibia does, going 1-for-4 with a HR.  Not sure anyone gets a Zaunhead for this one to be honest.

In other news, Adeiny Hechavarria or however the fuck you spell it got promoted to AAA Las Vegas yesterday, despite a 63 wRC+ in AA.  When I heard this, my first thought was "Who did he blow?", but the less cynical folks around the twitters are telling me that there was probably a clause in his contract (4yr/$10MM, immediate 40-man roster) that states that he's got to be at such and such level by whatever date. Apparently he has about 0 offensive upside, but is a son of a bitch of a glove and arm, plus he's real fast (The linked scouting report is from May of this year), though there are some conflicting reports, saying that his bat is catching up.  Having said that, he OPS'ed .622 in 111 games in AA this season, so I can't say I'm expecting a whole lot.  Still, all he has to ever do, if his glove is actually as good as people say it is, is be a #9 hitter.

It looks like the rumored pre-draft agreement between the Jays and 1st rounder Tyler Beede was bullshit, as Beede apparently will not sign.  If he doesn't sign, the Jays will get pick 21A in the draft next year, which could be as good as the 22nd overall pick, but will probably be worse than that, assuming at least one 1st rounder before that doesn't sign, as is the case pretty much every year.

Vernon Wells is going to make his return to Toronto for the first time since the trade tonight.  I assume there's going to be some combination of cheers and boos for the guy.  I don't really care either way, and I doubt he does either, given that giant bed of money that he has.  Brandon Morrow pitches for the Jays.  Hopefully he gets deepish in to this one, because you pretty much get a guaranteed appearance by Jon Rauch and/or Jesse Litsch if anything goes sour tonight.  Speaking of Morrow, Tom Tango looks at what happens to him late in the game.
Posted by Grady at 12:20