Jays sweep the M's away

Seems like good news.  The Jays have now won 8 of their last 10 games, thanks in part to playing some decent baseball, and in part to having 6 of those games against the Mariners and Indians (let's not forget that the Indians are not very good, despite their record).

Can we look a bit closer at this though?  3 games against the Mariners for any decent team should equal 3 wins, especially when the Mariners are playing like a bad version of the Mariners lately.  Either way, the Jays allowed 16 runs over those 3 games against a really anemic offense (though there was some Octavio Dotel vs. LHB garbage time in there somewhere), which frankly scares me a bit.  I hate to be this stick in the mud, but this "8 of 10" thing should be taken with a grain of salt, especially when it comes to heading in to Texas, who have an identical 8-2 record in their last 10 games.  The difference here is twofold: The Rangers have lost their last 2 games, both by 1 run, after losing an Ace vs. Ace battle last night against Jered Weaver, but they had also won 12 games in a row before that.  Fact of the matter: neither team has really faced a good team over that span of 10 games, so hey.

Anyway, as mentioned, the Jays are in Texas this weekend for a 3 game set.  Funny thing about this: most weekend games happen in the afternoon (more so Sunday games than Saturday), but all 3 games this weekend will begin at 8:00ET.  A Sunday night Jays game?!?! Could that mean...?  Bluejays...?  ESPN Sunday nighter?!?!  National exposure in the states?!  No, don't be stupid.  That right goes to CIN vs. ATL.  Still, this is a very weird occurence, since ESPN has a say on the schedule so as to achieve maximum viewership to their nationally televised games.  Now all Rangers and Jays fans will not be tuning in to the Sunday nighter, thanks to this game/having better things to do.  Nice pipe dream though. I saw a graph not to long ago that showed that the Jays have like 4 appearances in American Primetime over the last like 13 years or something like that.

What else?  Oh yeah, Casey Janssen.  You're usually good. 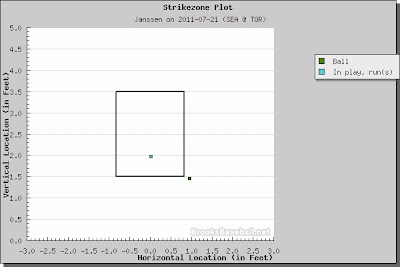 I'm actually pretty sure I saw Miguel Olivo's right eye have an "OM" in it, and the left had a "G!" when he saw where that pitch was going.

Eric Thames left yesterday's game with a sore ankle (apparently?), being replaced with gamesaver, Rajai Davis.  I assume Davis is going to get himself back in the lineup with his recent heroism.  People are a lot harder on Davis than I am.  Yeah, he's got the worst OBP in history, but he's faster than Superman and plays half decent defense.  I think that as long as he's used properly (not the leadoff spot!), then he's fine.  He has a .758 career OPS against LHP (.821 this season), and that doesn't even take in to account all 'dem steals (the way wOBA would), so there's no reason a logical manager (fingers crossed) wouldn't have him platooning against lefties literally every chance he has, and uses him as a 4th OF otherwise.  That kind of speed can be an incredibly valuable asset.

Cecil vs. Ogando tonight.  Bautista is scheduled to be back at 3rd base, which should relegate Edwin either to the bench or to DH.
Posted by Grady at 12:51