Well that was a facefucking

That got ugly quickly, though I guess that's what happens when everything that makes contact with a bat falls in for a double.

Here's something that's awesome:  Brett Cecil was puzzled at getting yanked after 3 innings last night, according to John Lott of the National Post.  Cecil tells us that he was "Really surprised, I think that’s why I’m at a loss for words. I only had three innings to work. Just can’t find the words to really explain anything right now,” but then used words to explain that he "Just got the ball up a little bit. Gave up three runs. Done it before. I don’t know.” 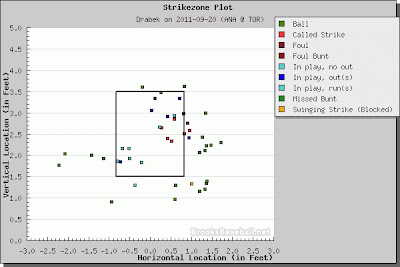 Kyle Drabek then came in and got slapped around a bit too, but I don't really see a whole lot wrong with what he was doing, as long as it's okay for me to cherry pick the pitches that resulted in hits, namely, those 5 in the bottom left corner, and the one that was at (I think) Callaspo's ankles.  I mean yeah, there's a meatball or two in there, but whatever.

I'm over it though.  This season's pretty well over, and it's not really about wins and losses anymore.  I've actually got enough intrigue in the Boston-Baltimore dumpster fire series to actually follow the games.  I take enough pleasure in watching Boston lose and blow the nice big lead they had.  More importantly, I'm enjoying Tampa Bay enough, mostly because they're catching the Red Sox and making this whole race beyond interesting.  See Papelbon blow that save last night was really awesome though, especially knowing that Tampa had already lost to the Yankees.


Yunel Escobar has been placed on the 15-day DL, retroactive to the 11th, which was when he was hit on the elbow by a pitch.  Of course, with expanded rosters, there is absolutely 0 advantage to DL-ing him, and the only disadvantage is that he is no longer eligible to play in games until he's activated.  He'll be eligible to return Monday, and isn't expected to be cleared for game action before then, so it doesn't really matter either way, but I just don't understand what positives can come from placing him on the DL, unless it has something to do with insurance and salary relief that the Jays could get from DL-ing him and getting someone else to pay 15 days of Escobar's salary or something.*

Edwin Encarnacion and Shawn Camp both apparently want to come back to Toronto next season, according to Shi Davidi.  I would gladly take Edwin back, but Camp... heh.  He was real good last season, but has stunk for the better part of this one.  I can definitely see the Jays choosing to bring him back on a really team friendly deal, but Camp started the year as a type-A, and is now unranked.  Granted, he's got a couple outings where he's given up 6 runs on 7 hits or something similar, which, to be fair to him, is pretty much mop-up work; he wouldn't be left in the game after giving up 3 runs in an inning if it wasn't a bullshit game already, so that's kind of misleading.  Still, I'd want it to be on a 1-year deal worth not very much, just so the Jays could dump him easily partway through the year if he sucks again.  I'm not all that sure what the Jays plan is going in to next year with regards to the bullpen makeup, but if it's a question of some young guy within the organization losing a chance at innings because Shawn Camp is there, I might get a little furious.  On the other hand, if we're looking at guys like Wil Ledezma or something similar, yeah, fuck it, I'd take Camp back for another shot.

From Fangraphs, a discussion between two guys who are way smarter than I am, about evaluating pitching performances.  NL CY YOUNG VOTERS: WHO YA GOT?!? THIS IS REALLY IMPORTANT!

Notgraphs presents their take on Eric Thames hitting himself in the face with a foul ball the other day.  I don't see any mention of the fact that this pitch comes on a full count, in a close game, with Jose Bautista on deck, or that that pitch almost hits him in the face without him swinging at it.  Learn to walk Eric.


*- I do know that most, if not all, contracts signed by MLB clubs and players are insured by the clubs in case of injury, but I'm not sure of the logistics of who pays whom and how much when an injury occurs.  With Joe Mauer making like $18MM this season, but spending half the year on the DL, I know that there wasn't a sunken cost of $9MM to the team, as they would get some of that back through the insurer.  With a 15-day DL stint for a guy who makes $2.4MM, I'm not sure what, if anything, the Jays would get from an insurer, I'm simply trying to come up with something to make sense of placing Yunel on the DL for 4 days.
Posted by Grady at 11:07